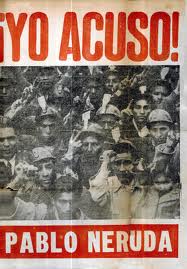 Mexico City. - In a telephone interview from Viña del Mar, a doctor who practiced in 1973, analyzes the case Neruda brings unknowns about his contemporaries and questions the patient medication applied Pablo Neruda in the Clinica Santa Maria: "I they should look Nifedipine (dihydropyridine) in the remains of the poet as discussed in Chile and the United States, the laboratories of the University of North Carolina should extend your search for what you injected Neruda on September 23, 1973: Dihydropyridine, Dipyrone, Dolopirona, or other toxic component. The redness of 'wadding' after injection, of what was said, also produces the dihydropyridine drug to dilate blood vessels, an overdose could kill Neruda ".
The doctor's identity was corroborated in the register of the Medical College, after a couple of video conferencing via Skype, we communicate by telephone to his office, because sensitive information Dr. Chilean requested anonymity, I agreed to contact the physician after looking at the photographs of the time and listening to the background that fit with the alleged murder of Neruda. I confess that in 400 interviews I posted on Clarín.cl is the first time that preserve the secrecy of the interviewee, I take full responsibility for the information presented here, the doctor's identity is confirmed and evidence that could shed light on the case brings Neruda .

MC. - Doctor, do not you find it strange that the Clinic Santa Maria "misplaced" the patient's Pablo Neruda?

DR. - When Santa María Clinic establishment military occupation, all the "personal" was "in charge" of the direction of the occupants, not necessarily doctors, 'that occurred in all hospitals and clinics after the coup. Therefore, the documentation and the records that were made during the occupation, especially the chips that especially interested him the dictatorship would never file the clinic. If the medical record is somewhere Neruda, will at some military file, but not in the archives of the Santa María Clinic. The pity of it, if the hypothesis of the alleged murder of Neruda is correct, is to think that the poet unwittingly got the lion's mouth believing that a safe clinical entered.

DR. - I remember one nurse told me that had been assigned to the Clinic Santa Maria from the Military Hospital, and in 1974 the dictatorship rewarded his services "inheriting" the furnished apartment of Dr. Eduardo Paredes-located in San Borja Tower, diagonal Paraguay-, Dr. Paredes was arrested on September 11, 1973 in La Moneda, the widow of Dr. Paredes was evicted and went into exile. I never forgot my conversation with that nurse-Military Hospital I still photographs of the era, if they check the public record of the property or the homes of the nurses in the clinic Santa Maria know who I'm talking at least a nurse is hiding his ties to the military hospital.

DR. - I give you the data and photographs, you will have to investigate: What was the nurse immediately after the coup in the Clinica Santa Maria?, Why the Military Hospital moved?, Who was her boss?, who pays for your retirement?, it is essential to have a complete list of nurses, doctors, administration and cleaning staff who worked at the Clinic Santa Maria in September 1973.

DR. - No, he says he went to work at the Santa Maria Clinic on September 20, 1973, Neruda was admitted on 19? Weird, is not it?, Draper says he left his patient instructed the "Dr. Price" but not "remember" the name of "Dr. Price". I repeat: I met the nurse who, as a reward for their services, the department of Dr. Paredes killed by the dictatorship after his arrest on September 11 in La Moneda.

DR. - No. It is up to the Police Department to clarify what was the role of Sergio Draper in the assassination of President Eduardo Frei Montalva and the alleged murder of Neruda.

MC. - In the three Chilean universities of the time, where he could study medicine there are no records of any "Dr. Price", as described by Sergio Draper, "Price" could be Michael Townley (CIA). How to locate the "doctor" Price?

DR. - That question should answer Sergio Draper, the "doctor" Price could be a pilot hyphenate: "Rose-Price" or a police colonel, "Edward Price Quinteros" I do not know. I repeat: the Clinica Santa Maria, like all medical centers, was tapped by the dictatorship, after reading the description of "Price" and study the rare circumstances where Pablo Neruda died, I would not rule investigating Dr. Hartmut Hopp (hierarch the Colonia Dignidad), we know that Hopp had returned from the United States, was 28 or 29 years and is "moving" smoothly into the clinical environment, hospital and university laboratories, as a physician in the title revalidated. Also I have my suspicions on Dr. Manfred Jurgensen Caesar (collaborator of National Intelligence), I do and fits perfectly in the description of "Dr. Price", it hurt me to see him in the list of doctors in the service of the dictatorship, was a nice guy, but we have known worst hypocrites. Both doctors-Hopp-Jurgensen resemble the "doctor" Price, both worked for the Pinochet dictatorship.

DR. - I suspect the Nifedipine-which at the time was known under the acronym of the laboratory Bayer: "Bay to 1040" -. In many parts of the world, including Chile, the Nifedipine was injected intra-abdominally to experimental animals for scientific information prior to marketing (with the name of Adalat) to determine harmless doses used orally in hypertensive patients. It's a great drug, but since then I knew that overdose killed. -Studies with injectable substance-were conducted in university laboratories in Chile, if my information: at Catholic University. If I have right in my suspicion, I can add that I consider a gimmick that witnesses speak of an injection of "Dipyrone", perhaps to argue a mistake, because the "Bay to 1040" has a similar chemical name: dihydropyridine.
I think they should look Nifedipine (dihydropyridine) in the remains of the poet as discussed in Chile and the United States, the laboratories of the University of North Carolina should extend your search for what you injected Neruda the September 23, 1973: Dihydropyridine , dipyrone, Dolopirona, or other toxic component. The reddening of "wadding" after injection, of what was said, the drug also produces Dihydropyridine by dilating blood vessels, an overdose could kill Neruda.

MC. - What do you think of the first forensic examination and reporting of cancer metastasis Neruda?

DR. - Neruda had cancer in the prostate, no one questions the diagnosis Clinic entrance signed by Dr. Vargas Salazar, the poet had surgery twice in France when he was Ambassador and his return to Chile received 56 sessions of radiotherapy cobalt in three months (early 1973), despite Neruda metastasis could travel to Mexico on September 24, there was no reason to say he was dying when his wife left him to go get some things to Isla Negra September 23, the exile to Mexico was already decided and organized. What interested the alleged murderers was to keep out of Chile Neruda, because it would have consequences that the military wanted to avoid. What matters is, after checking that the remains are indeed Neruda, is whether you can still detect-injected substances in her abdomen caused her shock-irreversible, if not treated immediately, as reported by El Mercurio (24 September 1973). Mario, you say that El Mercurio resumed press release information of the Clinic Santa Maria dated the night of 23, that makes sense, it is rare that the death certificate was issued the next day (24), the certificate is signed by Dr. Vargas Salazar, who was not on duty the night of 23, the Clinic issued the death certificate the night of 23, the death certificate does not report the same to the press release of the Clinic Santa Maria, taken by El Mercurio and La Tercera and La Prensa de Santiago.

MC. - Is it necessary to check that the bones belong to Neruda?, Is not it obvious?

DR. - The determination of DNA is of paramount importance, the military could get a skeleton with bone metastases, it is not sufficient to identify the remains exhumed from Neruda for clothes, or the color of the coffin.

MC. - Finally, would you be interested in studying the results of the exhumation of Neruda?

DR. - Yes, the test results are of general interest, for legal and historical implications, for doctors the results will be the subject of study for years, will have to wait a couple of months to finish the forensic investigation.