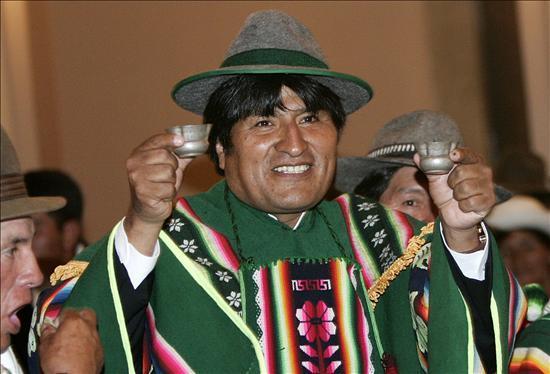 "I'm not a criminal," says Evo

At times close to hold a birthday over our murdered Pablo Neruda, situation performed by a CIA agent.

In the moments when he is denounced by the practices operate Nerudian the gringos made keeping the documents in support of Santa Fe which is the practical manual gringa cultural penetration in Latin America,

The blind always at the service of all the dirt that is in the world perform surgery EVO, then spread like wildfire, the action taken by the European imperialism sub against a president worthy:

The President of the Plurinational State of Bolivia, Evo Morales, was returning to be headline news internationally: for seven step to be known as the "first indigenous president" of the continent

Now on tour in several countries and in the last hours was "kidnapped" and held for four European countries prevented the presidential plane in flight, use its airspace.

"This is not a provocation to Evo Morales, but Bolivia and throughout Latin America.'s An assault on Latin America of some European countries," said the president forced the scale at the airport of Vienna (Austria) by the suspicion that the former government security agent of the United States, Edward Snowden, was in the presidential aircraft.

The Chief of the Bolivian State should remain close to 14 hours in the airport Austria, where an emergency landing because France, Portugal, Italy and Spain revoked the authorization for the Air Force use airspace and airports in those countries in his return from Russia to La Paz.

In Moscow (Russia) participated in the Second Summit of the Forum of Gas Exporting Countries.

Evo Morales, speaking at the event, called for the defense of natural resources considered as a property of the people, should be administered by the States and demanded technological and scientific support to benefit the nation and meet the international demand energy.

To defend and share the experience of the nationalization of hydrocarbons, the Head of State said: "The countries especially in Latin America and the Caribbean where natural resources go to the state, administered by the State belong to the people, permanently we are attacked, because historically plundered our resources and experience of Bolivia is to recover those resources for the benefit of the people, "he said.

Given the seriousness of the act, the Organization of American States, could not be done as many times ha.hecho the blind, deaf and dumb, could not do it this time and their masters demanded explanations of why the presidential plane prevented sobrevolase their territories placing "at risk" president's life

The Union of South American Nations (UNASUR) convened an extraordinary meeting to discuss the situation.

The Andean Community of Nations (CAN) dismissed the action because it violates international conventions.

While the countries of UNASUR is ready to hold an emergency meeting called by the president of Peru, Ollanta Humala, his counterpart Cristina Fernandez de Kirchner Argentina wrote on his twitter account: "Ollanta will convene a meeting of UNASUR. It's 22h25 in Peru. Tomorrow will be a long and difficult day. Calm, not be able to '.

After exchanging views with the Head of State to prevent the Bolivian presidential jet is requisitioned, Fernández wrote: "Just perfect, Evo force".

From Uruguay, its president José Mujica declared attempt outraged by the humiliation, while the Ecuadorian foreign minister Ricardo Patiño said it was a tremendous offense, to say the least and his Venezuelan counterpart Elias Jaua said that country makes his own international aggression.

"I feel it's an excuse to frighten, intimidate and escarmentarme, mostly an excuse to try to silence us struggle against looting policy against invasions and domination ... I can not understand that France, Italy, Portugal and Spain say and affirm that stop me because I was being a gentleman Edward Snowden, "remarked the President of Bolivia.

Article 40 of the 1961 Vienna Convention states that "If a diplomatic agent passes through the territory of a third State that granted a passport visa if such visa was necessary, or is it to go to take possession of their functions, to return to his office or to return to their country, the third State shall accord him inviolability and such other immunities required to ensure his transit or return. "

Given the violation of the Vienna Convention, from different parts of the country, they heard voices of rejection, protest and mobilization.

Accompanied by the Cabinet in full, García Linera denounced also the flagrant violation of the Vienna Convention regarding the official flights and use of airspace and airports, previously consented.

The Bolivian dignitary denounced even a blackmail attempt a diplomatic official of Spain to admit-Morales against the international standard requisition-official aircraft of Bolivia.

"I could not allow them to review the plane because I'm not a criminal and second you know by international standards is official plane. The President has immunity inviolable, their right to move anywhere in the world. I rejected by dignity, I have an obligation to defend the dignity, sovereignty because it is an offense to the President, a whole people, is to an entire region like Latin America, "confessed Evo Morales, in time to take flight back to heart of Latin America.

Democracy and rights according to market rules.

From Brussels, the European Commission confirmed that it is for each Member State to decide whether to accept or deny access to their airspace, according to the Community of Transportation spokeswoman, Helen Kearns.

During his lifetime union Evo Morales fought in the coca-producing areas of the U.S. DEA and already being anointed president not only expelled the U.S. ambassador to country but also to agencies under the north country.

The truth is that the arbitrary decision of the authorities in France, Italy, Portugal and Spain to deny its airspace to Bolivia's presidential plane has generated a unanimous voice of protest in all social sectors of Bolivian territory and also very important to world because not only violated international conventions but tried violating the most sacred: the sovereignty and dignity of a people

Luckily we have across America to PINERA or CAPRILES, worshipers of the empire and its actions

"I go now in this day full of volcanoes, to the crowd, to life"