Manuel Araya: "Matilde Urrutia and John A. Figueroa forged the will and testament of Neruda " 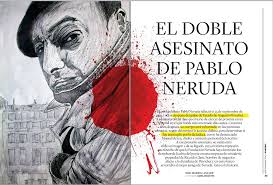 Manuel Araya: "Matilde Urrutia and John A. Figueroa forged the will and testament of Neruda "

Mexico City. - In a telephone interview from San Antonio, Manuel Araya (1946), driver and secretary of Neruda, speaks of the judicial and journalistic investigation of the murder of the 40th anniversary celebrations for mourning and the failure of the last will of the poet "I demand that the Neruda Foundation goods returned to country poet's legacy belongs to Chilean universities, the CUT, to the Writers and the Reyes family. The current Neruda Foundation is a quirk of Matilde, forged the will and testament of Don Pablo. The courts must take to Juan Agustín Figueroa usurped what 40 years ago, I talked to the lawyer Rodolfo Reyes, Neruda's nephews agree that the legacy of the Foundation Cantalao must be for the people, for their young poets and artists. I have the certainty that Neruda goods return to the country, so he wrote in his poetry and a Notary Public of Valparaiso ".

MC. - Don Manuel, what is the latest news in the case Neruda?

MA. - The Chariot Mario judge ordered DNA tests to direct nephews Pablo Neruda to compare them with the bones of the poet, also send samples to laboratories in Switzerland for toxicology tests, will be an additional method to studies at the University of North Carolina.

MC. - After two years of legal and journalistic research, how has lived learning and forensic medical terminology?

MA. - It was two years of learning, for me this is all new, I have spoken with doctors, lawyers and journalists to understand medical terminology and forensics. I will continue claiming that killed Pablo Neruda on September 23, 1973, Neruda was not dying, otherwise we would not have gone with Matilde to Isla Negra on September 23, evicted if we had never left alone, Neruda was not catatonic , receiving visitors, read a book in the Santa Maria Clinic on September 22 and finished Homer Maple dictate the final pages of confess that I have lived (1974), Neruda travel to Mexico on September 24, any statement of the poet in the exile would have been a formidable force, Don Pablo had a drawing power in the world and would use it to overthrow Pinochet.

MC. - We enter the final stretch of the judicial investigation, what elements are needed to clarify the alleged murder of Neruda?

MA. - We are about to clarify what happened on September 23 at Clinica Santa Maria, Sergio Draper need to say who are the doctors who killed Neruda and what substance was injected, Draper gave three versions: said that Neruda died a urinary tract infection (Jornal do Brasil), then said he was not on duty, that he saw the death of Neruda, the "Dr. Price" nursed him to the end, but Draper is contradictory because in 1975 declared that Neruda asked for a medicine to relieve pain and watched him die (The Third). The plaintiff attorney Eduardo Contreras is considering changing the role of Draper-of-suspect witness, Draper knows what happened but is hiding the truth, now says the doctor last seen alive Neruda was "Price".

MC. - You suspect that the "Dr. Price" is Michael Townley (CIA agent), but the Associated Press (02/06/2013) reported that Townley was in Florida on September 23. Don Manuel, what builds your suspicions?

MA. - The man in the composite sketch and the one in the pictures you sent National Television (TVN) is very similar to Michael Townley, the doctor sent me to buy the drug "Urogotán" to a drug on the street Vivaceta-the afternoon of September 23, was a "doctor" blue-eyed blonde, Draper matches my description of Townley, if it was CIA agent could well make him a Florida alibi or a fake driver's license. The "doctor" who sent me to the pharmacy set me up, to reach Vivaceta street stopped me, I was shot in the leg and beat me to the police station Carrion street, then I tortured at the National Stadium.

MC. - Dr. Sergio Draper testified before the Police Department, "La Clinica Santa Maria had a great house pharmacy, so it is impossible that you have been asked Neruda's driver to buy a medicine out of the institution" ( Record Docket No. 1038-2011), also said he ordered the injection of "Dipyrone" in the buttocks, not the batting. Would you accept Draper judicial confrontation with the polygraph?

MA. - Draper lie, I would face him if the judge orders it. Neruda showed me the red spot on his batting, the afternoon of September 23 emergency Neruda spoke to say that her sleep had been placed in the batting injection (belly), upon arrival we found with fever, if they had not put Neruda that shot does not die at Clinica Santa Maria, to the Police Department drew reddish stain was Neruda in his batting. I have no problem confronting Draper, he is under suspicion, it is very rare to come into work at the Santa Maria Clinic on September 20, 1973, it is very rare that he was on duty at Neruda's murder and the murder President Eduardo Frei.

MC. - The great irregularity is on the death certificate by the "cancer cachexia", but the admission card to the clinic reported the diagnosis of "metastatic cancer" cachexia is not developed in four days ...

MA. - I doubt Dr. Vargas Salazar, he signed the death certificate, but was not on duty the night he killed Neruda, why not ordering a certificate signed the autopsy?, Why is hidden Clinic Neruda's medical record?, why the clinic did not provide the Police Department a list of all the doctors, nurses and administrative staff, cleaning assistant who worked 11 to September 23, 1973?

MC. - On September 23, you could just go to Isla Negra, Neruda however Matilde Urrutia asked to accompany him, my theory is that Neruda wanted to say goodbye to Alicia Urrutia, the last love of a poet. Would you be interested in talking with the Muse album Black Island and the flaming sword?

MA. - Apparently Mrs. Alicia Urrutia and testified before the investigative police about what he saw in the Clinica Santa Maria when she visited Neruda, I think we should leave her alone to Mrs. Alice to not cause problems with her current husband in Arica. Perhaps Neruda wanted to say goodbye to Alicia Urrutia and therefore Clinic rescheduled his trip to Mexico from 22 to 24 September, I remember when Don Paul told Matilde: "patoja, accompanies Manuel to Isla Negra to find some things," Matilde did not have to go to Isla Negra, had to stay to take care of Neruda in the Clinic, the bags were ready before going to the clinic, Neruda addressed a plane to Mexico on September 22, but later repented and rescheduled the flight for on Monday, 24.

MC. - Evandro Teixeira Brazilian photographer Neruda visited Sept. 23 at the Clinic and captured the only images of Neruda in the morgue on September 24, Evandro? Should testify at trial?, Teixeira? Talk to your trip Isla Negra?

MA. - Would be an important element Evandro Teixeira declare before the judge Mario Chariot, Evandro met the wife of the Military Attache in Brazil and Chile gave facilities to visit Neruda and Matilde Santa Maria Clinic on September 23, the next day took several photographs of Neruda's body showing that not suffering extreme malnutrition as says the death certificate to include cachexia, and even the prosecuting attorney Rodolfo Reyes-direct nephew Neruda has a book with photographs of Evander and Rodolfo was recognized among the pictures of those who attended the funeral of Neruda in the General Cemetery. I would talk with Evandro, I will see it in the opening of his photo exhibition in Isla Negra, dwell with lawyer Rodolfo Reyes to declare invite Evandro Teixeira.

MC. - Don Manuel, if the prosecuting attorneys successfully demonstrate Neruda's murder, would it be feasible to file a lawsuit to recover the legacy of Neruda and respect their will and testament?

MA. - Neruda Foundation demand that the goods back to the country of the poet's legacy belongs to Chilean universities, the Confederation of Workers (CUT), the Society of Writers (SECH) and the Reyes family. The current Neruda Foundation is a quirk of Matilde, forged the will and testament of Don Pablo. The courts must take to Juan Agustín Figueroa usurped what 40 years ago, I talked to the lawyer Rodolfo Reyes, Neruda's nephews agree that the legacy of the Foundation Cantalao must be for the people, for their young poets and artists. I have the certainty that Neruda goods return to the country, so he wrote in his poetry and a Notary Public of Valparaiso.

MC. - John A. Sebastián Piñera authorized Figueroa "brand Neruda" for the "LAN VIP Lounge", Piñera returned the favor to reopen the "Hall Neruda" in La Moneda (27/06/2013), what kind of tribute pending Foundation before the 40th anniversary of the death of Neruda?

MA. - Never attend an event organized by the Foundation thieves, it was logical that Piñera will return the favor to Juan Agustín Figueroa, this week announced Neruda American Award for Cuba dissident poet and work them: Sebastián Piñera, Ampuero and Agustin Roberto Figueroa. Do not forget that Juan Agustín Figueroa was the creator of the Terrorism Act against the Mapuche community, remember that invested Figueroa copyright of Neruda in the company of Pinochet Ricardo Claro. If Michelle Bachelet wins the election will send a letter explaining the kidnapping of the legacy of Neruda and ask him to print-again-the Popular Anthology 1972 to reach one million free copies that agreed Neruda and Salvador Allende, there is so much Michelle Bachelet did not care and will have another chance to fix their mistakes.

MC. - On the 40th death anniversary will present the play "Neruda's funeral", written by Renzo Sicco and Luis Sepulveda. Accompany? Staging in Chile?

MA. - Yes, Renzo Sicco invited me, I know I presented the play at Villa Grimaldi, in several regions of Chile and Isla Negra. Renzo Sicco asked me many questions about Neruda, we communicate by email, I admire the work of Renzo Sicco, is a fighter for human rights in Chile and Argentina, I was moved to read your book on Neruda's funeral.

MC. - Finally, the Neruda Foundation carried out his threat and fired two workers in retaliation for union strike, are you still at risk unfair dismissal of union leader Enrique Segura?

MA. - Juan Agustín Figueroa is believed master of the Fundo Neruda, labor courts are in favor of the Foundation and not the union, this thief of Juan Agustín Figueroa Union mocked and dismissed two workers over La Chascona. A Enrique Segura was fired because many lawyers are defending him, and Henry was the adopted son of Neruda, the Foundation would not dare to go through another escándrilegio: international Aalo. We will win the Neruda murder trial and will demand respect for the will and testament of Don Pablo and Cantalao Foundation, thank you Casasús friend, you are the journalist who found more background on the case Neruda, you will see that everything will be fine to our cause.